Prayers for a Spiritually Sleeping Country 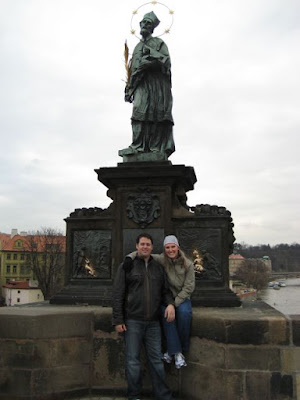 We have been so blessed with Isaac’s work to be treated to great trips all over the world. Monday we came home from Prague, Czech Republic. While much of what we saw seemed surreal (the architecture, historical buildings and landmarks) there was an overwhelming sense of emptiness. Before leaving for our trip I took a few weeks to study up a little on the Czech Republic, the history, the people, their religious history. Wow! I had now idea what I was about to go see. Even in studying it with the kids I can’t say I even touched the tip of the iceberg… there was is just so much history there. Since I really enjoy history I loved being there … going on the tours…sitting amongst the old buildings… walking through the old monasteries, synagogues and churches.
The kids and I were praying for the country before we left. Praying for the people! As we were reading in “Operation World” we realized that for most of the past century Czech has not enjoyed the liberty of freedom of religion. The Czech people have endured the leadership of socialistic dictators… communists… Hitler even. Today the do have freedom of religion; however the have been taught through their education system that there is no god. We had a very good conversation with a Czech woman and her husband while we were there… the last night we were there actually. We bought a painting from them and while he was wrapping it up Isaac asked her if she had any spiritual beliefs. She quickly said “no I do not! Our country education system teach to be atheist.” She stumbled with her English as you can see, but we got the jest of what she meant. She continued to tell us that she was raised in Russia and her husband was raised in Czech… they were both brought up with the same theology… None!
What amazed me was that she recognized that her beliefs were taught her by her education system. It seemed very clear to her. We asked her if she had ever questioned what she was taught and she looked at us like… “why should I do that?”
I have been thinking of her and the other Czech people… European people actually. They have been through so much turmoil… so much hardship that our country has never experienced. Sadly, there is an emptiness… as they adorned their churches and buildings with statues of saints, gold and precious jewels. As the people work during the day to fund their “night life” of hopping from dance club to bar. They were trying to fill a void hundreds of years ago and they still are.
Lord I pray for your people that live in Eastern Europe. I pray you draw them to you. I pray you hear their cries and send your leaders to go and minister to the lost there. Lord let us not forget them, but impress upon our hearts those people we meet and their stories. Let us not forget to pray for people in the Czech to come to know you in a real way. May the one day see your Son’s face and See His Glory. May the be so blessed to experience a real relationship with you.